An Unbelieving Woman Healed By The Power of Christ

We just received a testimony from New York. It involves a 15-year-old radical disciple named Rodrigo Luna who serves in the Army for God led by John Slionski. Army for God trained with The Elijah Challenge last June under Joseph White, who in turn attended the Advanced Elijah Challenge Training last spring in Houston.
Here is the testimony of Rachel Mieses, the woman who was healed: 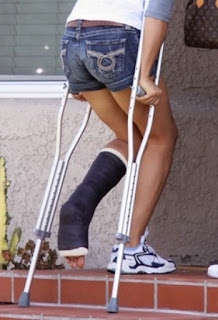 "Hey, this is Rachel Mieses. Your friend or family Rodrigo Luna ministered to me at a shopping center and I had a broken leg! I didn't believe in God before but now I do and there is no way that anyone who reads this can say He is not real!
I was crying because I broke my leg playing basketball with my friends ... and today the pain was so bad for some reason. It hurts sometimes but today it was horrible, but not no more. I was with my friend, I saw Rodrigo praying for some people and then my pain came really bad again. I was crying with my friend saying I just want this pain to go away. Somehow after 2 or 3 minutes Rodrigo came back saying “I know what you can do.” I said “what, take some pills?” He said “No. If you let me pray over you, the Son of the Living God is gonna heal you.”

I said, “there is no way that’s gonna happen.” He said why don't you just ask Him! I swore a four-letter curse right to his face. (I felt bad afterwards.) He said “just ask Him.”

I went like a sarcastic jerk saying, “God, if you are real, heal me!” After a couple of seconds I said “no, pain still here.” Without asking he took the crutches away and I said, “what are you doing, you idiot.”

He said, “God just healed you, the pain is going down behind your knee.” I started crying because it was true. Then he started saying stuff that I had never told anyone, not even my closest friend. I was crying on his shoulder for a while. I’m being honest. I don't know you but it's so impressive how a kid like that can only just come and say “you’re healed.” That’s what touched me the most. He took some pictures of my leg. I can't believe it. I wasn't supposed to walk until next month. Thank you, Jesus. Thanks for your time."
We are in the last days, and the spirit and power of Elijah are being restored to the Church!

Posted by revalbertkang at 2:58 AM No comments: