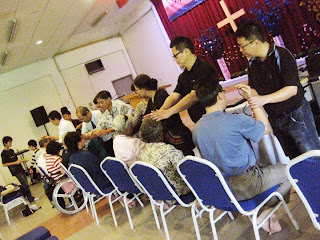 Most pastors and leaders from charismatic churches believe they have a fairly good understanding of the ministry of healing. They have attended various Seminars and Conferences on healing as well as Benny Hinn Crusades.
They may feel they have seen it all, that they have “been there and done that.” Perhaps they saw and heard some things that they could not quite agree with. They have been taught that only some specially anointed servants of God---certainly not all--- have the gift of healing. And most leaders and believers have concluded that the Lord has not given them that gift.
Thus the crowds come and fill up the sports arena or stadium when Benny Hinn or some other celebrated healing evangelist comes to town. And that is the end of the story for them regarding the ministry of healing.
However, it turns out that is not the end of the story, whether according to Scripture or to experience. Scripture teaches that even before the Holy Spirit came on the Day of Pentecost bringing the gifts of the Holy Spirit---including the gifts of healing---Jesus already gave power and authority to his disciples to heal the sick and cast out demons.
Luke 9:1 When Jesus had called the Twelve together, he gave them power and authority to drive out all demons and to cure diseases, 2 and he sent them out to preach the kingdom of God and to heal the sick.
Jesus gave his twelve disciples this power and authority for preaching the kingdom of God to the lost. The miraculous healings would demonstrate to the lost that the kingdom was near. This power and authority was given not only to the twelve apostles, but also to the seventy disciples.
Luke 10:1 After this the Lord appointed seventy others and sent them two by two ahead of him to every town and place where he was about to go. …9 Heal the sick who are there and tell them, ‘The kingdom of God is near you.’
In fact, to whomever Jesus sends out to proclaim the gospel of the kingdom of God to the lost, Jesus gives this power and authority.
Mark 16:15 He said to them, “Go into all the world and preach the good news to all creation. 16 Whoever believes and is baptized will be saved, but whoever does not believe will be condemned. 17 And these signs will accompany those who believe: In my name they will drive out demons; 18 …they will place their hands on sick people, and they will get well.” …20 Then the disciples went out and preached everywhere, and the Lord worked with them and confirmed his word by the signs that accompanied it.
Thus Scripture clearly teaches that believers---all of whom have the responsibility of sharing the gospel---have been given power and authority to heal the sick and cast out demons for the purpose of demonstrating and confirming the truth of the gospel. This is not the gift of healing, which was made available to the Church only afterwards beginning on the Day of Pentecost. The gift of healing, as are all the gifts, was given primarily to build up the body of Christ, to minister healing to infirm believers.
1 Corinthians 12:7 Now to each one the manifestation of the Spirit is given for the common good [of the body of Christ].
In contrast, even before the Holy Spirit came, Jesus had already given the authority to heal to his disciples for the purpose of proclaiming the kingdom of God to the lost; that is, for the purpose of evangelism. Thus the purpose of the gift is quite different from the purpose of the authority to heal. While the gift of healing is not given to all, every believer has been given authority to heal because he is a witness of Jesus Christ to the lost.
This is what most charismatic leaders and believers fail to understand in terms of actual practice. But the Lord is now restoring to the Church the understanding and exercise of the authority to heal the sick and cast out demons for the sake of the gospel and the Great Commission.
Pastor Albert Kang of Malaysia who is the Coordinator for Elijah Challenge Asia taught about this authority to heal to servants of God in the Philippines. These pastors and leaders began to heal the sick as Jesus commanded his disciples in the gospels. They and their church people witnessed many miraculous healings after being trained. After Albert returned to Malaysia, the Filipino pastors whom he had trained began to share what they had learned with other area pastors. The following is an exchange from their email correspondence with Albert.
From the Philippines:
“Pastor Reggie and I had a meeting with Pastor Arnold Acay (Officer in Makati Ministerial) and Pastor Sam (Officer in Valenzuela Ministerial). We had a meeting at Max Restaurant where we presented The Elijah Challenge. At first they were quite skeptical because they already knew some things [about healing]. But we told them the simplicity and the difference with The Elijah Challenge.

I am so happy that they are interested. I am just like a sales representative selling things through testimonies. Ha ha ha! Praise the Lord, they are considering The Elijah Challenge. They will present The Elijah Challenge to their ministerial association so they can set things up for the upcoming Elijah Challenge Seminar.”
Pastor Albert replied to them:
“This is great! I really appreciate what you folks are doing for the Lord---sharing The Elijah Challenge Model of End-time Evangelism. Most pastors would be skeptical when they hear about teaching on healing. I was one of them. However, when they learn about the kingly anointing and look at Luke 9 and 10, they would at least be convinced that scripturally, it is viable. Then we show them a real-life demonstration---once they see the actual healing before their very eyes, they are convinced.
We did that at Nueva Ecija in the first meeting with fifty-plus pastors and church leaders. The first person to try out The Elijah Challenge healing was an elderly Pastor who had an arthritic left knee. She sat stoically and her non-verbal body language was saying something like, "Okay, I am here---heal me." After the third round of the laying on of hands, she was completely healed. The atmosphere turned from skeptical to warm reception of The Elijah Challenge.”
From Missionary Keith Roussel of Roberts Liardon Ministries:
"I have recently returned from our missions trip. We had a great time! I was so amazed by the results. The students stepped forward in boldness and faith and they performed many healings through the power of God. I could see the look of joy and amazement in their eyes as the people who they were laying hands on were instantly healed! They became so addicted to healing people that they took every opportunity to heal the sick that came their way.
We ministered in a Musl__m community during the trip. This was my first chance to perform the healings before preaching the message, and it worked! When the people saw the healings they flocked to us. I've become so addicted to the success of this method of reaching the lost that I cannot wait for the next opportunity to put it into action!"
Keith's entire report on what happened in the Musl__m community
This is not the same as what we have been taught in the past about healing. The Lord is now restoring to the Church a fuller understanding and practice of New Testament healing for the end times and the fulfillment of the Great Commission.
Posted by revalbertkang at 4:14 PM No comments: