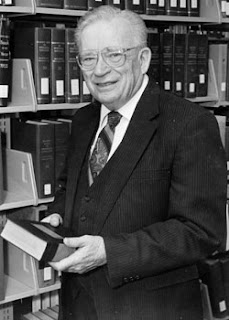 The two most outstanding healings in my family: My grandfather, Samuel Horton was operated on for prostate cancer. The surgeon cut through the tube so that the urine was draining out through the wound. He placed pads to absorb the urine and sent my grandfather home to die. My uncle, Joseph Clark, was then the pastor of the Assembly of God in North Hollywood, called us all together. When he prayed we felt the presence of God in a powerful way. The next morning his daughter, my Aunt Birdie, went up to change the bandages. The wound was all healed up, perfectly clean and healed up completely in a few days. My grandfather went back to work and lived to be 87. That healing had to involve creative power.

The other outstanding healing came when my father developed a goose-egg sized lump on his throat. He went down to the 120 room in Angeles Temple where his friend Brother Arthur was ministering. When Brother Arthur prayed the lump melted away immediately and never came back.

Another time I was preaching in an Assembly in a suburb of St. Louis, Missouri. After the service, a woman came up and asked me to pray for the cancer in her. Her doctor had told her this disease would take her life in a short time. Four years later I was asked to preach in the same church. While sitting on the platform the pastor pointed the same woman out. After I had prayed she was totally healed and was still praising the Lord.

God is still the Great Physician. Yahweh-Raphah, Rophe is a participle indicating it is His nature to heal.

Stanley Horton, Th.D.
----------------------------------
Dr. Stanley M. Horton is well known and respected as a gifted leader—a history-maker whose impact will be felt on future generations forever. God has used his writings and teachings to affirm the doctrinal destiny of Pentecostalism and the Assemblies of God in the twentieth century and up to the present. At age 92, Dr. Stanley Horton continues to travel the globe. As a scholar, mentor, and prolific writer, Dr. Horton has worked on many projects, including writing curriculum for the Assemblies of God for 25 years and acting as the chairman of the committee for the Life in the Spirit Study Bible.
Posted by revalbertkang at 3:00 AM No comments:

We just received some wonderful news from The Elijah Challenge Director Joshua Gowda in India. Do rejoice with us. Here's his message...

Dear Brother William,
Greetings in the name our Lord Jesus Christ.
On 25th December Christmas Day we conducted our TEC- Evangelistic Feeding Event. Praise The Lord, we had a very successful Event. Approximately 650 Hindus came to attend the Feeding Event on Christmas Day at Kalvati Hospital grounds, Dariya ganj Road, New Delhi,
The Event started with the singing of gospel songs by children and believers from Elijah Challenge Churches in Delhi and followed with healing testimonies and the sharing of the gospel resulting in 590 Hindus receiving Jesus Christ as their Lord and Saviour. Glory to God !
On the next day Sunday 26th December, five new Elijah Challenge churches were planted in North & East Delhi.
Praise the Lord, we can say that Elijah Challenge Churches are the fastest growing churches in North India. Please continue to uphold these new believers and our new TEC church leaders in your prayers.
Happy New Year!!! We are making an eternal difference. What an amazing privilege — that God would entrust  in us with the opportunity to communicate His message of love, hope and healing to a world in need! Thanks for loving India. God’s incredible blessings and favor be with you,
With love and much prayers,
Joshua, Anita, and Simon
-----------------------------
Pastor Joshua Gowda
Director
The Elijah Challenge
Training Center India
#109- B Pocket – I , Dilshadgarden
New Delhi, - 110095, India
Phone: +19 11 09810364986
Thank you for partnering with us so fruitfully in the gospel, dear brethren!
-William & Lucille
www.TheElijahChallenge.org
Posted by revalbertkang at 1:11 AM No comments: