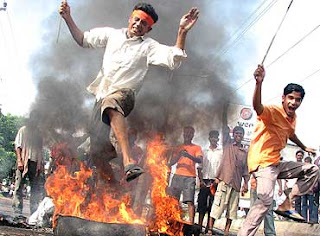 In 2008, believers in Orissa, India, suffered intense persecution at the hands of anti-Christian extremists. They destroyed Christians' homes and burned churches to the ground. They went so far as to beat, rape, burn and murder believers.

Haroon Das helped lead this brutality against Christians. When the riots against believers in Orissa began, he traveled throughout his district to stir up violence.

“They destroyed Christians' homes and burned churches to the ground. They went so far as to beat, rape, burn and murder believers.”
On August 27, 2008, Haroon returned to his home village. He led a mob that damaged the church building of a Gospel for Asia-supported missionary. Haroon was one of the extremists who shattered the windows, broke the cross on top of the building and set fire to the contents of the building.

The riots subsided, but Haroon himself began experiencing a problem. One of his legs became weak and caused him great pain. Eventually, one side of his body was completely paralyzed.

With all his physical strength evaporated, Haroon's normal daily life came to a halt. He didn't understand why this happened.

He went to doctors and spent lots of money on medical treatment, but he remained paralyzed.

Someone was brave enough to tell Haroon that when Christians pray, a person can receive healing from any kind of sickness. He thought about going to church, but then talked himself out of it.

"I have persecuted these people very badly, and if I go to them, how can they pray for me?" he asked himself.

Haroon finally mustered up the courage to go.

He showed up at a prayer meeting on a Tuesday night. He was shocked when the believers happily joined in prayer for him—the man who destroyed their church! Haroon brought his whole family—his wife, two children and his mother—to church the following Sunday.

“I have persecuted these people very badly, and if I go to them, how can they pray for me?”
When the worship service ended, the pastor, Gospel for Asia-supported missionary Bhajan Sen, led the whole congregation in prayer for Haroon's physical ailments.

Although he is facing opposition from his older brother and from some of the other villagers, Haroon refuses to turn his back on Christ. His brother is threatening to cut him off from the rest of the family, but Haroon says he will stand firm in his relationship with Jesus regardless of the consequences.

Like the people of Israel in Ezekiel's day, Haroon was called by the God who says, "As I live...I have no pleasure in the death of the wicked, but that the wicked turn from his way and live. Turn, turn from your evil ways!" (Ezekiel 33:11 NKJV) By the mercy of Christ, Haroon no longer harasses the Lord's people. Instead, he joins with them in worshiping his Savior.
Posted by revalbertkang at 3:03 PM No comments: